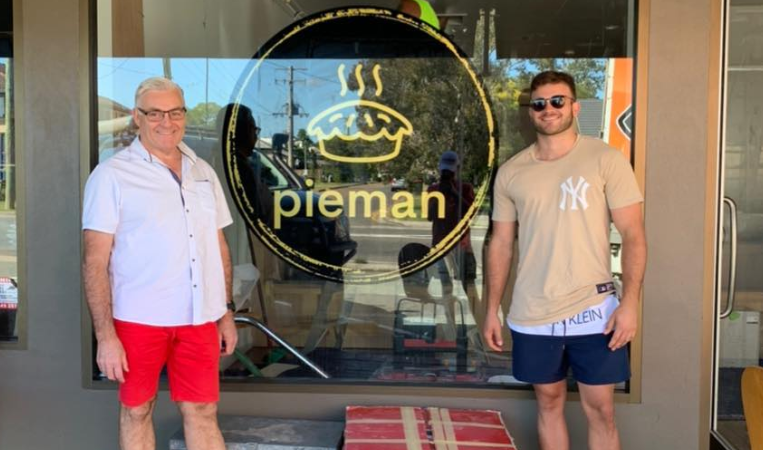 Family pies. Gluten-free pies, Sausage rolls. Vegan pies. Lamingtons. Tarts. The list goes on and people are steadily streaming in Pieman‘s door, ever since the pie shop braved the uncertainties of the coronavirus economy and opened in early May 2020.

Co-owned by brothers Jaden, Adam, and Ryan Donnelly, along with their father Stephen, this family-run business has been showing Oxley why Pieman’s crust is worthy of their trust, and giving more established bakers a run for their money.

The pie shop is built upon the legacy of the boys’ grandfather and his collection of recipes, tried and tested over almost eight decades in the industry.

Despite being open for barely half a month, Pieman already has quite a following. Their passionfruit vanilla slices are consistent bestsellers and run out shortly after they’re put on display.

They also offer a scrumptious selection of gluten-free products, from sausage and vegetable rolls to pies in several delicious kinds — chunky steak, pepper steak, lamb and rosemary & chicken, and vegetable!

Customers who love gluten-free are given the option to purchase them as an unbiased product, to be baked at home. With a couple of hours’ notice, Pieman can also bake them in-store, where they use a separate, strictly used for gluten-free products only.

Brunch or a quick snack or dessert can also be part of the agenda. They have steak and mushroom pie, bacon and egg, sausage rolls, laminators, caramel tarts, apple turnovers … you get the picture.

During a time when most businesses are taking a step back or contemplating their next move extra cautiously, Pieman is making bold steps towards growth and their confidence and hard work are paying off in spades.

The shop has been busy every day, with people in and out for more of their delicious wares! Things are looking up on the expansion front as well. The family has plans to open in Cleveland by June and at the Gold Coast after that. In a classic “strike while the oven is hot” manner, the family will be opening several more stores before the end of the year and plans to license the brand next year to tap even more markets out there.

To get your pie fix and be among the first to taste what is now Oxley’s hottest new sensation, check out Pieman on Oxley Road.