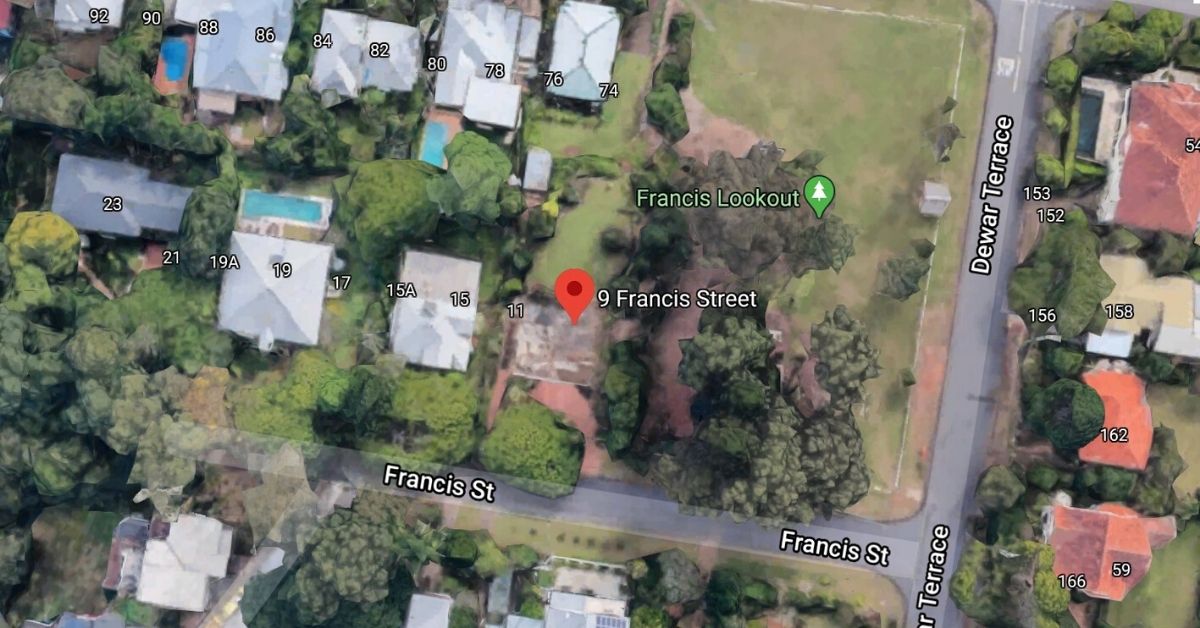 A community in Corinda is opposing the planned development of a three-storey house that will stand directly on the west side of one of Brisbane’s oldest and most beloved park, Francis Lookout, essentially blocking its gorgeous views.

The neighbours are asking the Council to reject the development application for 9 Francis St, which has been waiting for approval since August 2019.

They are also asking the State Assessment and Referral Agency to recall its endorsement of the development, citing that the oversized house will affect the state of a heritage-listed site.

Read: Enjoy The Panoramic Views of the District at Francis Lookout Burial Ground in Corinda

Francis Lookout was a cemetery built in the 1860s for the pioneers, the Francis family, who used to own 21 acres of the land in the southwest suburb of Corinda.

In 1936, the family’s trustee gifted Francis Lookout to the Council. Since its last burial in 1966, Francis Lookout became a public parkland, offering a place of tranquility for the residents, with its pleasurable views of Mount Coot-tha, the D’Aguilar range and Brisbane CBD.

Read: A Glimpse at the Story of Francis Lookout in Corinda

There are at least four empty lots next to the Francis Lookout, which was bought by the Mel Investment Group in 2018. The company then filed the development application the following year and made changes to the plans on 10 July 2020.

Meanwhile, the community has been submitting their objections to the development via the Council.

“Our concerns regard the height and bulk of the proposed dwelling, the lack of Traditional Building Character code in the design, and the effect it could have on significant heritage trees in the park,” one resident wrote.

“I believe the building of this development on 9 Francis St Corinda would be a total devastation to the Corinda community. There is history tied to that location, and that is something I value about having a property here,” another local said.

“A 3 storey house would totally ruin a once very well protected view and the overall peaceful and tranquil aesthetic of Corinda. Furthermore, Francis lookout has been a place for friends and family to meet up and watch fireworks for a long time. It’s a very popular spot for disabled people, elderly people.”

Neighbours also said that some movement has been taking place in the lot on Francis St although they know that the Council has yet to make a decision.